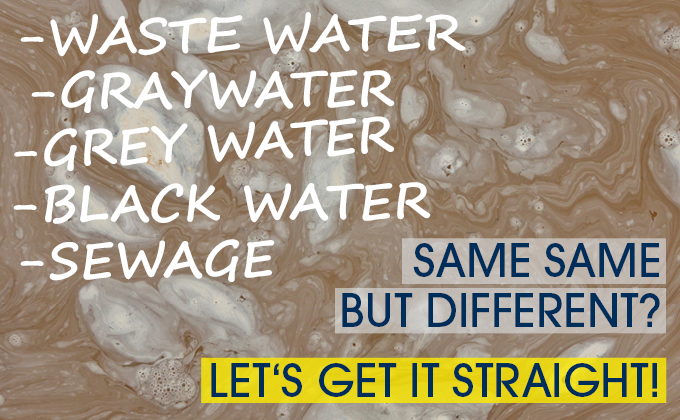 There are several terms around that are used in the context of wastewater treatment. Some of them are very specific while others aren’t specific at all. Let’s dive into it and get it straight!

“Wastewater” is a generic term and can mean either black and grey water together or separately, depending on the context. The term “wastewater” is also used synonymously with the term “sewage”. While “wastewater” is the most commonly used term, it is less selective than “Sewage”, “Black water” or “Grey water”.

“Sewage” is the most official among the wastewater treatment terms. It is the term used by the IMO (International Maritime Organization) both in the MARPOL Convention (International Convention for the Prevention of Pollution from Ships; “MARine POLution”) as well as by the IMO’s Marine Environment Protection Committee (MEPC) when dealing with the subject. All IMO resolutions issued by the MEPC on this subject speak of “Sewage” and “Sewage treatment”. Therefore, IMO certificates are issued for “Sewage treatment plants”, they don’t say “Wastewater treatment plants”.

“3. Sewage means:
drainage and other wastes from any form of toilets and urinals;
drainage from medical premises (dispensary, sick bay, etc.) via wash basins, wash tubs and scuppers located in such premises;
drainage from spaces containing living animals; or
other waste waters when mixed with the drainages defined above.”

WHAT IS BLACK WATER?

WHAT IS GREY WATER?

First of all this term is spelled in two different ways: Graywater with an “a” is mostly used in American English and greywater with an “e” is used in British English. Grey water is defined in IMO (International Maritime Organization) resolution MEPC.227(64) as follows:

To find out more on HAMANN sewage and wastewater technology, click here!