Aeration and circulation are two important aspects of sewage systems onbard ships. The contents, the ratio between black water and grey water and the condition of the sewage mix that is fed into a sewage treatment plant have a major impact on the treatment performance. The influent sewage mix for the sewage treatment plant should be well circulated to avoid clogging and to ensure a good balance of suspended an dissolved solids. The influent sewage mix should also be well supplied with oxygen and thus in aerobic condition. HAMANN conditioning systems help the crew on board to meet these criteria in the daily operation.

The longer untreated sewage or black water are stored in holding tanks, the more likely it is for anaerobic conditions to develop. Natural  biological processes within the sewage consume oxygen and this consumption needs to be compensated. Anaerobic conditions can lead to the formation of hydrogen sulphide (H2S) or even sulphuric acid (H2SO4). The first is an extremely smelly and potentially lethal gas, the latter can erode the substance of the plant, the piping and ultimately the ship’s structure. For this reason, the IMO MEPC’s resolution MEPC.53(16) (Guidelines for the operation, inspection and maintenance of ship sewage systems) states that storage tanks without active aeration should be monitored very closely.

A tank aeration systems compensates the oxygen consumption by the supply of fresh oxygen and thereby also assists the active biological processes – the natural way of sewage treatment. It also helps to minimize sedimentation of solid particles, although not as effectively as a tank aeration and circulation system. We recommend tank aeration systems primarily for the sewage mixing tank and black water holding tanks.

Tank aeration and circulation systems combine our aeration technology with a circulation of the tank content to achieve maximum conditioning performance. Besides keeping the sewage in aerobic condition (no risk of hydrogen sulphide (H2S) or sulphuric acid (H2SO4) formation, support of natural biological processes), these systems also effectively prevent sedimentation. When tank contents develop sediments, the suspended solids concentrate in the lower layers and the dissolved solids in the upper layers.

When the “thick” lower layers are fed into the STP, there is the risk of clogging the sludge compartment, cleaning nozzle and sensors inside the STP.

When the “thin” upper layers are fed into the STP, the Dissolved Air Flotation (DAF) may not perform properly as it relies on a good balance of suspended solids and dissolved solids in the influent sewage mix for the process. 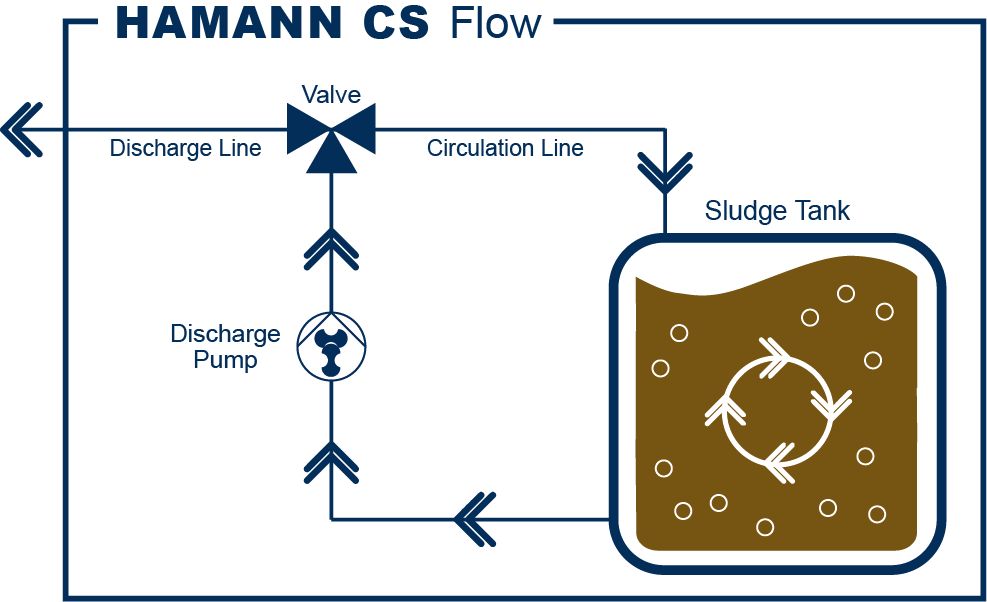 Sewage sludge stored in a holding tank tends to rapidly develop sedimentation. The lower layers will then no longer be pumpable for discharge purposes and have to be manually removed from the tank, requiring a considerable amount of time and effort.

To avoid having to execute this most unpleasant task, a circulation system should be installed in all sludge tanks. It constantly circulates the sludge in the holding tank, keeping it in pumpable condition at all times.