WHAT IS SEWAGE? WHAT IS WASTEWATER? 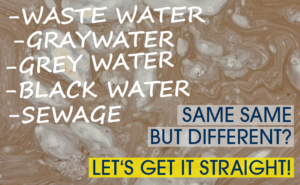 What is wastewater? What is sewage? What is blackwater? What is greywater? What is galley water? There are a multitude of definitions of these terms, which sometimes differ more, sometimes less. These definitions are given by the INTERNATIONAL MARITIME ORGANISATION (IMO), the U.S. ENVIRONMENTAL PROTECTION AGENCY or classification societies. Here you can find out what is meant and what it is all about!

Wastewater is to be understood as a generic term that can include many different substances. Ballast water, bilge water, wash water from exhaust gas cleaning systems, residual water from food waste, drainage from toilets, showers, wash basins, etc. – all this basically falls under the term wastewater.  The term wastewater is therefore not very selective.

When we speak of wastewater in our field of activity, we mean sewage. Both terms are often used as synonyms, although this is not very accurate.

Sewage therefore contains black water in any case and can also contain grey water.  The technology of HAMANN sewage treatment plants is designed to always process a mixture of black water and grey water – i.e. sewage in its entirety.

Different definitions of the term sewage come from e.g. the IMO, the EPA and classification societies.  Our definition above is largely congruent with that of the IMO. The IMO, however, formulates the last point more openly and speaks of “other waste waters when mixed with the drainages defined above”. We are more specific here by limiting this point to grey water. One reason for this is, for example, that mixing black water with residual water from food waste (which would fall under “other waste water”) would mean that the rules of MARPOL Annex IV (Sewage) would no longer apply to this mixture, but those of MARPOL Annex V (Food Waste).

The term blackwater is not officially used by regulatory authorities such as the IMO, but it is used by the industry and classification societies. As with the term sewage, the definitions of black water also differ depending on the source.

Black water is therefore a subcategory of sewerage. The terms blackwater and sewage are often used synonymously, as they both contain faecal matter.  However, HAMANN AG distinguishes between the two due to the higher concentration of faeces, pathogens and other potentially hazardous substances in black water.

First of all this term is spelled in two different ways: Graywater with an “a” is mostly used in American English and greywater with an “e” is used in British English.

The IMO (International Maritime Organization) resolution MEPC.227(64) point 2.7 also includes galley water in its definition of grey water, without making the treatment in a grease separator a requirement. However, due to the high fat content in galley water, separate treatment in a grease trap is important not only for the performance of sewage treatment plants, but e.g. for the entire piping system for sewage and greywater on board, which can otherwise quickly become clogged by fat deposits.

WHAT IS GALLEY WATER?

At HAMANN AG, we distinguish between grey water and galley water – unlike IMO, for example. The reason for this is the high concentration of FOG in galley water. FOG stands for “Fats, oils and greases”. FOG impairs the performance of sewage treatment plants and can, for example, clog the piping system for sewage and greywater on board due to deposits. That is why we require galley water to be treated in a grease separator so that it can subsequently be considered greywater and processed further in our wastewater treatment plants.

Treated sewage (effluent) can be discharged into the sea (local/regional discharge bans such as in no-discharge areas must be complied).

Sewage sludge mus first be kept on board in holding tanks. There are two options for the discharge of sludge:

WASTEWATER IS NOT GARBAGE!

Solid garbage is to be considered separately from wastewater. Garbage is defined in MARPOL Annex V as follows:

“1.1 Garbage means all kinds of victual, domestic and operational waste excluding fresh fish and parts thereof, generated during the normal operation of the ship and liable to be disposed of continuously or periodically except those substances which are defined or listed in other Annexes to the present Convention.”